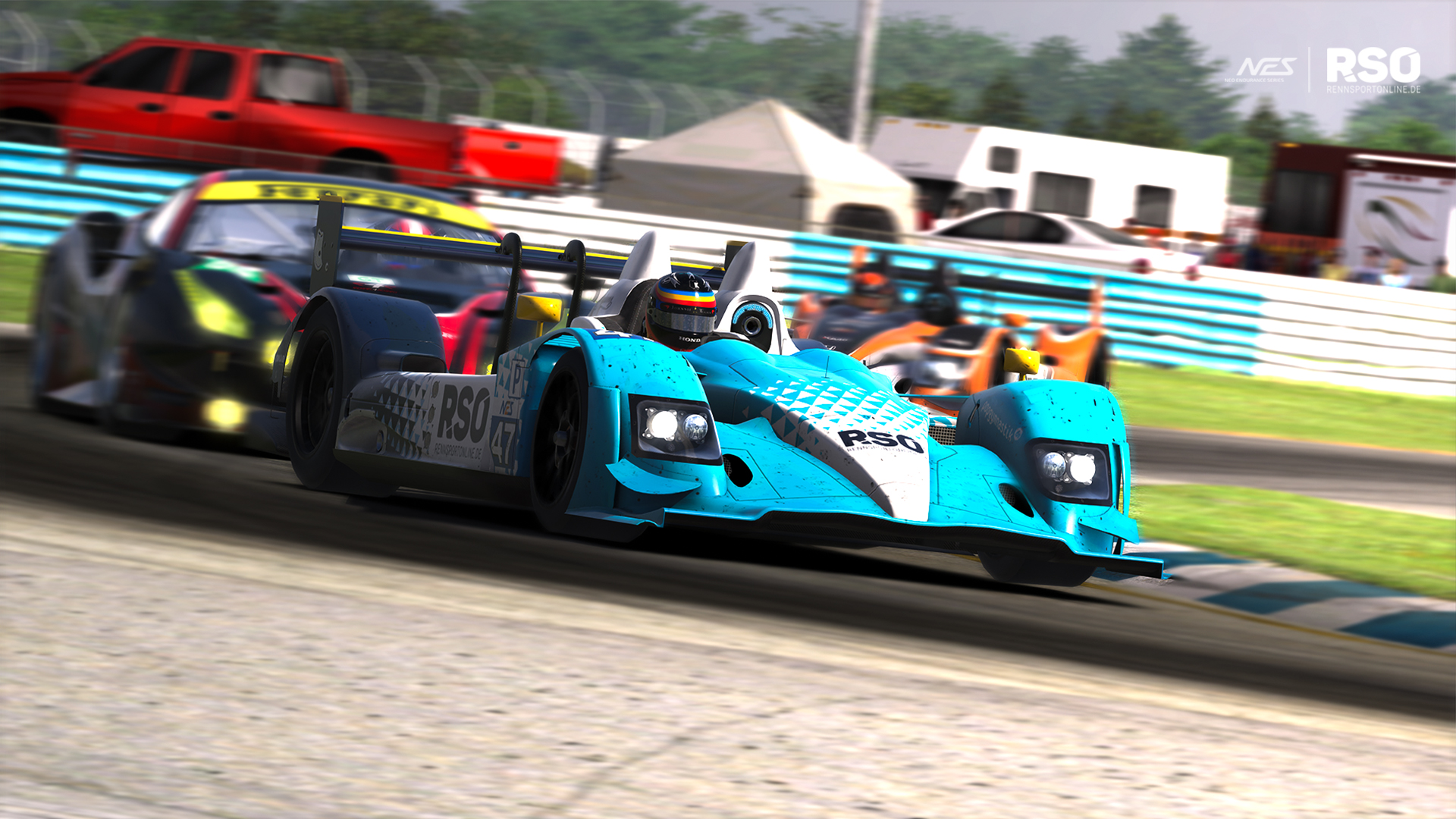 [Sebring, FL] – Round one of the fourth season of the NEO Endurance Series was a tough one for Rennsport Online. Both cars lived trough intense six hours of racing on the bumpy and extremely challenging Sebring International Raceway. At least we managed to earn some valuable points.

For our all new entry in the prototype class of the NES, it is already clear that this season holds a lot to learn. During the preparation for the season start, our squad was working hard on understanding our new car, learn its characteristics, find the tricks for setting it up and adapt the new style of driving a prototype. Therefore, Saturdays qualifying result did not surprise us very much but still dampened our prospects for Sundays race: P17 out of 20 cars within the fastest of the two classes. To realize our goal for the season, it will be hard work during the next months.

For the race, Stephan and Manuel split duties, with Manuel having the honor of starting the debut NES season for our #47 prototype. During the early stage of the race, he was focused to keep in contact with the pack, defending his position but also to manage the early challenges of the race. Like always, Sebring is a very tough track, especially when it comes down to multi-class racing. The narrow and bumpy track has many high curbs to avoid, tricky corners and the speed difference between GT-cars and the prototypes isn’t that high. Therefore, patience, timing and concentration are key to survive the early stages of the race. Manuel did well so far and brought the car to pits after 50 minutes into the race, for its first service. Here strategy came into play: for the race distance of six hours it was clear, that the prototype teams would need to go for seven stints, while double-stinting the tires was the fastest option. Hence, one of the main decisions was to either triple-stint one set of tires or to change it three times in total. We opted for the latter and changed tires during our first stop already, which was an offset compared to all of our opponents early in the race. 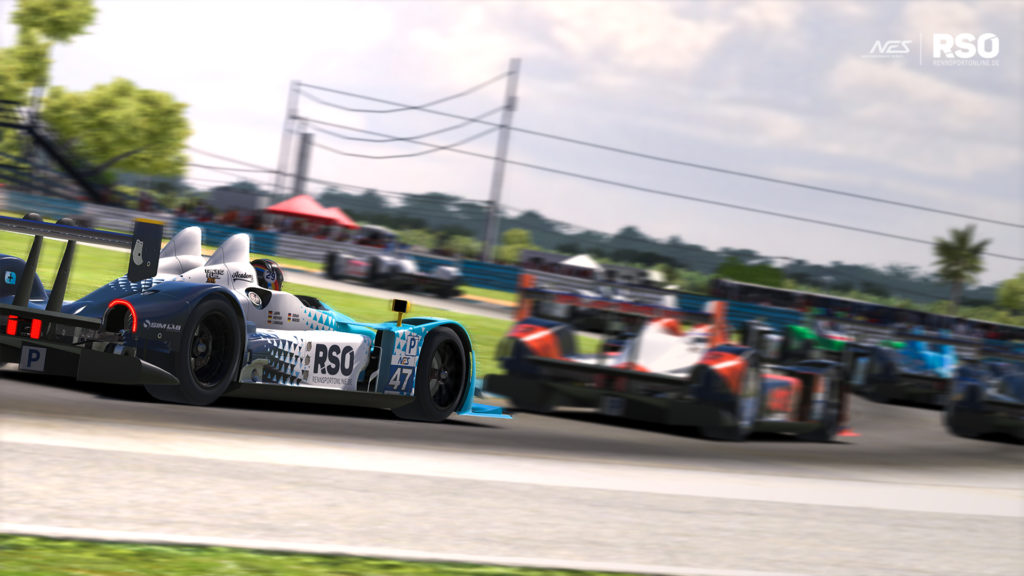 Keep calm and stick together: During the early stages, Manuel focused on holding position and playing strategy right 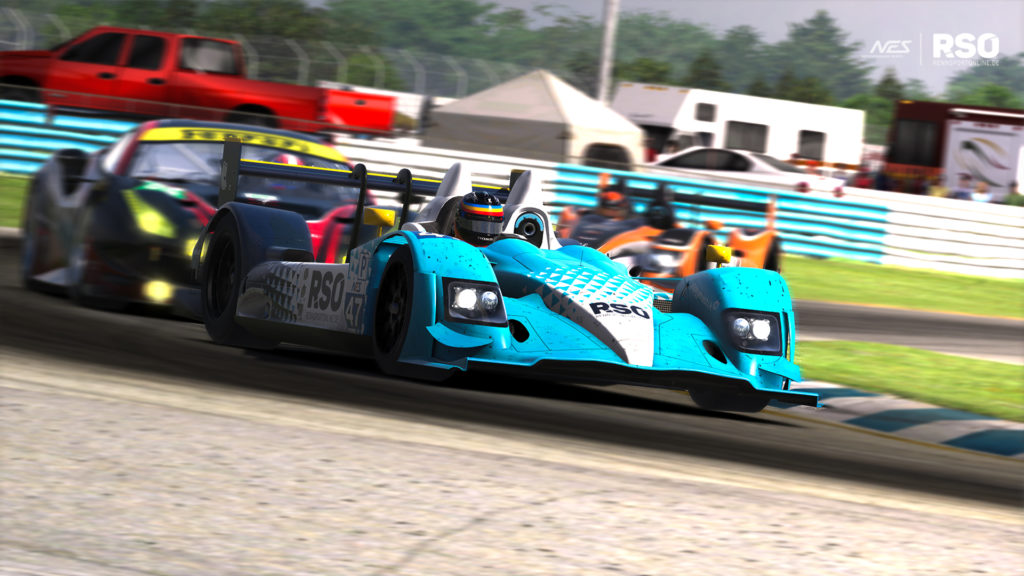 Following that, Stephan took over for a double-stint, not changing the tires during his pit stop. Because of the mentioned strategic offset, he was fighting for clean, fast and consistent laptimes but obviously was struggling to find his rhythm. Anyways, that was the hardest part of the race for the drivers, because over 30 GT-cars meant up to six overlapping maneuvers per lap. It was ultra heavy to find the right spots to overtake, to keep calm while knowing that every second counts. However, he did perfect, when strategies of the prototypes were cleared after the second round of pit stops, we found ourselves on P13, with P11 in reach, but also with P17 only 10 seconds behind. That indicated how close everything was and at the same time it’s proof of NES’s pure quality of competition! Unluckily, Stephan found himself directly behind the Teo Martín eSports-HPD. The Spanish squad ran a medium downforce setup, making it almost impossible to overtake and leaving our #47 behind with no chance, losing tenth after tenth, turning out to be the key situation for the final race result.

Another indicator for the high quality of the field was the fact, that 19 out of 20 prototypes actually finished the race with no major incidents, meaning, that sheer race pace decided over positions. While the track got faster and faster towards the end of the race, our #47 was still in a close battle for P11, with P16 only few seconds behind. This incredibly close mid-pack was a grab bag for positions and the gaps varied depending on traffic. After the last rounds of pit stops, Stephan found himself on P13, still, on the hunt for P12. With 20 minutes to go, he claimed P12 trough a nice overtake move and started to close in to P11. While risking everything to catch TeamGT’s prototype, too, the ERT-HPD closed in from behind, making it a three-car-battle for the final lap. When Stephan tried to position his car at the entrance to the backstraight for a final-corner-move he was held up by traffic, forcing him to cut the corner and leaving him behind with a slow-down penalty. This enabled ERT, to steal P12 from our #47 instead of enabling us to attempt for P11. Despite this final-corner-disappointment, our #47 showed a solid debut and could steadily improve from the back of the field to a secure midfield-spot. However, only less than a second seperated us from P11 and keeping in mind we spent almost a full stint behind the Teo Martín eSports-prototype, you can guess how crucial track position, setup and strategy are to gain advantage over our extremely strong competitors.

Unsuccessful showdown: instead of challenging for P11, our #47 had to give away P12 in the final corner of the six hours race!

Contrary to the straight race of the HPD, our #97 GTE-Ferrari with Cedrik and Phil had a rollercoaster trip of feelings and positions. As our two young drivers also plan to compete in the Blancpain GT World Championship Qualifiers together, the NEO Endurance Series race has been aimed to be the first real test after the successfull race at the SimExpo, where they finished on a strong P8 in the GT500 race.

Already in the first lap, Cedrik was able to jump from P23 to P20, overtaking Team Heusinkveld’s Christian Kiewitt,  MSP-Phoenix Racings’s Ecki Hoffarth and another struggling competitor. After this strong start into the race, it was in lap 3 when the event turned against us: Turning into the first corner, Cedrick got a snap oversteer and spun to the outer barriers. Luckily he avoided contact, but ending up ten spots behind our former position was not the ideal situation for #97’s plans to race into the Top 10. While Philipp and (strategist) Nils started to question the original strategy and worked on plan B, the team suffered the final punch into the GT-Nirvana: Cedrik was challenging the #62 – Vendaval Ferrari at the inside of Sunset Bend and suddenly got hit by them as they planned to serve a S&G penalty they received earlier. The #62 Ferrari cut the line, hit our #97 and hence, ended all hopes. Dust and Bones: Getting into racepace again after this spin and contact we were able to see the implications of this crash: Major aero damage prohibited us from gaining back the time we lost to our competitors. We finally decided to pit early, let the car recover from the damage and make the best of a bad job to achieve a Top 20 position coming from P28 now. 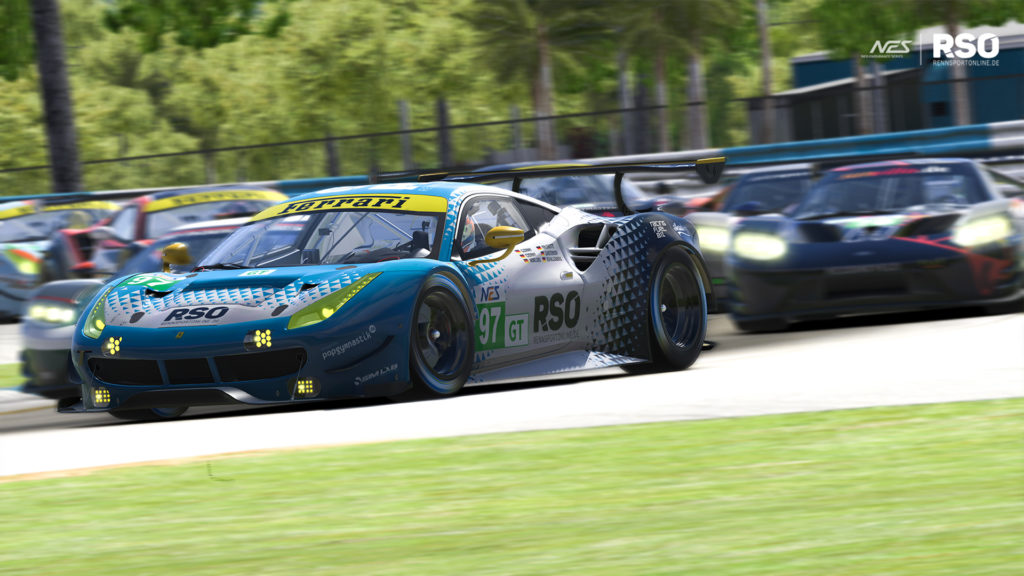 Strong start: During the first three laps, Cedrik could make up some valueable spots, until… 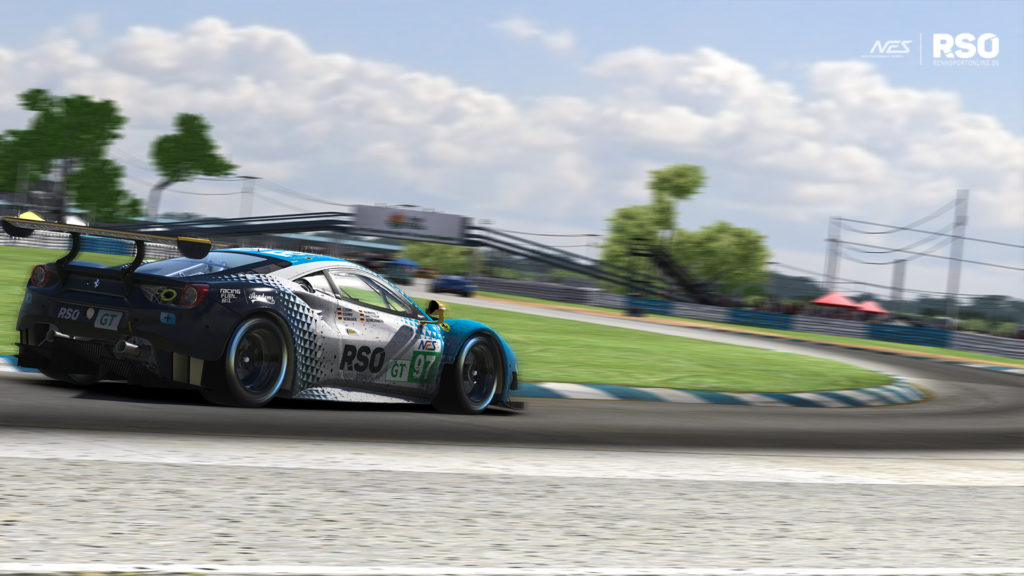 Weak start: a snap oversteer spin struck down all hopes early, right before everything got even worse

As the track was still very slippery during the first third of the race, Cedrik was not able to make up a lot of time on our competitors. The Fenix Motorsports Ferrari was the only car in reach.  The 2nd stint ended with some frustrations and heavy discussions on the team radio: The driver and the team crew agreed to prepare even better for the next race, as serious setup issues prohibited us to make up time in the low-grip environment and led to the sudden snap oversteer. Last but not least, the discussions led the #97 to miss the pit entry and lose antother 20 seconds or so due to make another lap on almost no fuel. Philipp jumped into the car and had serious competition: The #83 MSP-Phoenix Racing car with Alex Thiebe was only 15 seconds away! During his double stint, Philipp overtook them, smashed very consistent lap times into the track and was able to gain time on various competitors. Running outside the Top 20 still, Phil’s double stint was nothing but stabilizing the early issues of our Ferrari. Nevertheless, the team wondered about the missing race pace compared to the longruns during race preapartions.

During the next stint, Cedrik found the reason: During the slow extra Inlap at the end of the second stint, the team switched to engine map 5 to bring the car back to the pits…and did not realize, they forgot to switch back. Running in fuel saving mode the #97 was losing half a second per lap for almost two hours of the race. Back in engine mode 1, our #97 suddenly was able to drive the laptimes of the class leaders and work their way back towards the Top 20. Philipp took over again for the last stint, running on P22. Quickly he could close the gap to Fenix, and PRT and Torque Freak Racing were only 15 seconds away. With a faboulous late race pace and consistent laptimes in the mid-1.58s, Philipp even managed to unlap himself from the race leaders, gain three more spots and brought the car home on P19. Lesson learned? It was easy und unnessessary faults which struck down #97. The squad needs to reconfigure its preparation plans and needs to work on a faster setup, especially for the extremly competitive qualifying. However, the last two stints showed, that Top 5 positions can be the achievable objective for the future. With Cedrik and Phil working as a homogenous team, this time we did not use this strength good enough and need to improve within the next weeks! However, in the end, and despite an insense race with a lot of troubles, both managed to earn some points; who knows how important these are going to be over the season? 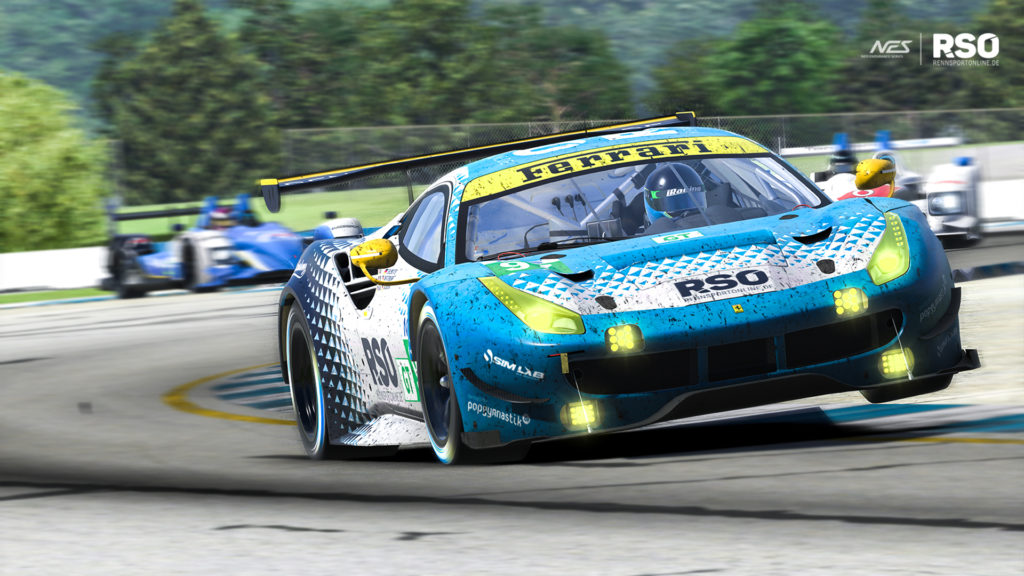 Fightback: After many issues, Cedrik and Phil managed to recover and earned some valuable points for the champoinship!

The NES-field will stay in the US for round two of the season. At the long-standing Road America Circuit near Elkhart Lake, Wisconsin, the Green Flag will fly on November 12th. Different to Sebring, the 6,5-Kilometres long track is not that bumpy but has only few options to overtake, too. Some narrow and blind corners will aggravate the traffic management and therefore round two will be even more thrilling than last weekends season opener! Our team has to work hard on qualifying pace and strategy during the preparations for the race, to keep our season goals in reach! Meanwhile, you can inform yourself about our season progress as well as find some nice stats and background information on our NES4-season overview! Or you can rewatch the broadcast from round 1. #goRSO