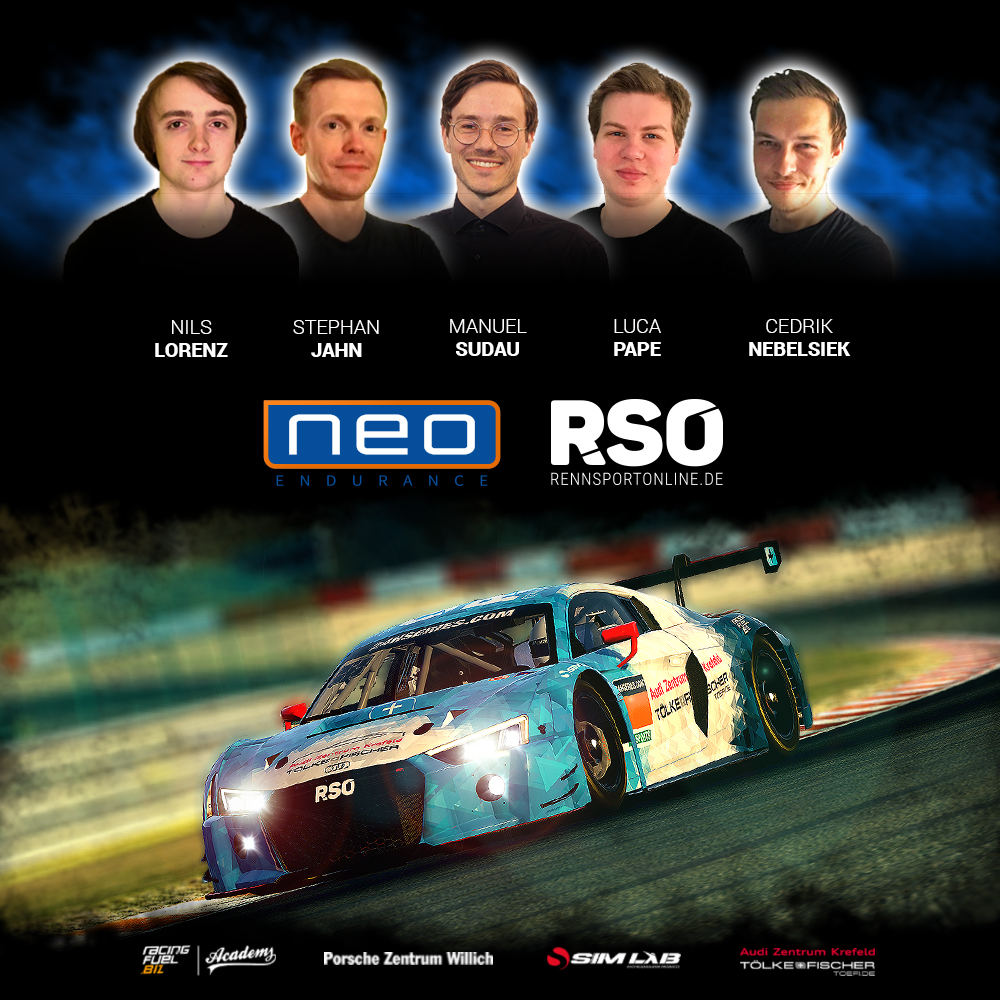 We are back! After an incredibly tight pre-qualifying, we achieved one of the hottest entry cards in SimRacing: Rennsport Online is super proud to compete in the famous Neo Endurance Series – again! The famous series bundles the top class of iRacers from all over the world, making it one of the most challenging competitions in virtual racing – especially now that iRacing is closing down its Endurance World Championship Series. Since NES was founded in early 2013 this endurance series under the administration of Niel & Egil Organisation (NEO) quickly evolved to the host of close and thrilling racing which was broadcasted to the world all live by Racespot TV. Unforgotten is our first NES-Season (NES3): From our super fancy old livery to a great podium result at the Nürburgring and a great championship battle to the end. Also, NES3 was the time of a cool cooperation with German Motorsport Magazine, where we had our own collumn – YEAH! So, awesome to be back and face a great premiere: Neo Endurance Series is now the 24H SERIES ESPORTS!

It’s going to be an interesting journey for our #97 GT3 class entry: Stephan, Manuel S. Ceddy, Nils L. and our new trainee Luca will share duties over the course of our comeback-season. Five races, each of which 6 hours long and one grand finale are forming the new 24H SERIES ESPORTS. Hence, each weekend will feature a maximum of two or three drivers. Therefore, we might see five different lineups over the season which makes it difficult to define any expectations. However, it will be interesting how our #97 Audi RSO8 LMS GT3 will show off. In a field full of top class opponents, like Biela Racing Team, Phoenix Racing eSport, Team Heusinkveld, Williams eSports, Huber Racing eSports, Sorg Rennsport eSport or Williams JIM Esports we’ll have to show six troublefree races to compete for more than individual race success, but we are very confident to set some highlights and sure, we’ll enjoy the racing!

[Spa-Francorchamps] – We even did not make it to the first turn! A hughe pile-up ended our hopes early and P12 was everything we could achieve.
What a though start into the new 24H Series eSports 🙁
Nils L. managed to secure a strong P13 during qualifying, with pole to P17 within one second. We cannot even describe what happened at the start, but all of a sudden a Mercedes turned left, hit another car and 9 cars where crazily flying from left to right. Nils could not avoid the ‘big one’ and took away some serious damage on our Audi. For the rest of the 6 hours of racing our drivers could do nothing but lapping the circuit and wait. Thus, round 2 of the series on November 10th has to bring us some better result!Thanks NEO Endurance Series for a brilliantly organized endurance event and RaceSpotTV for another nice and attracting broadcast. 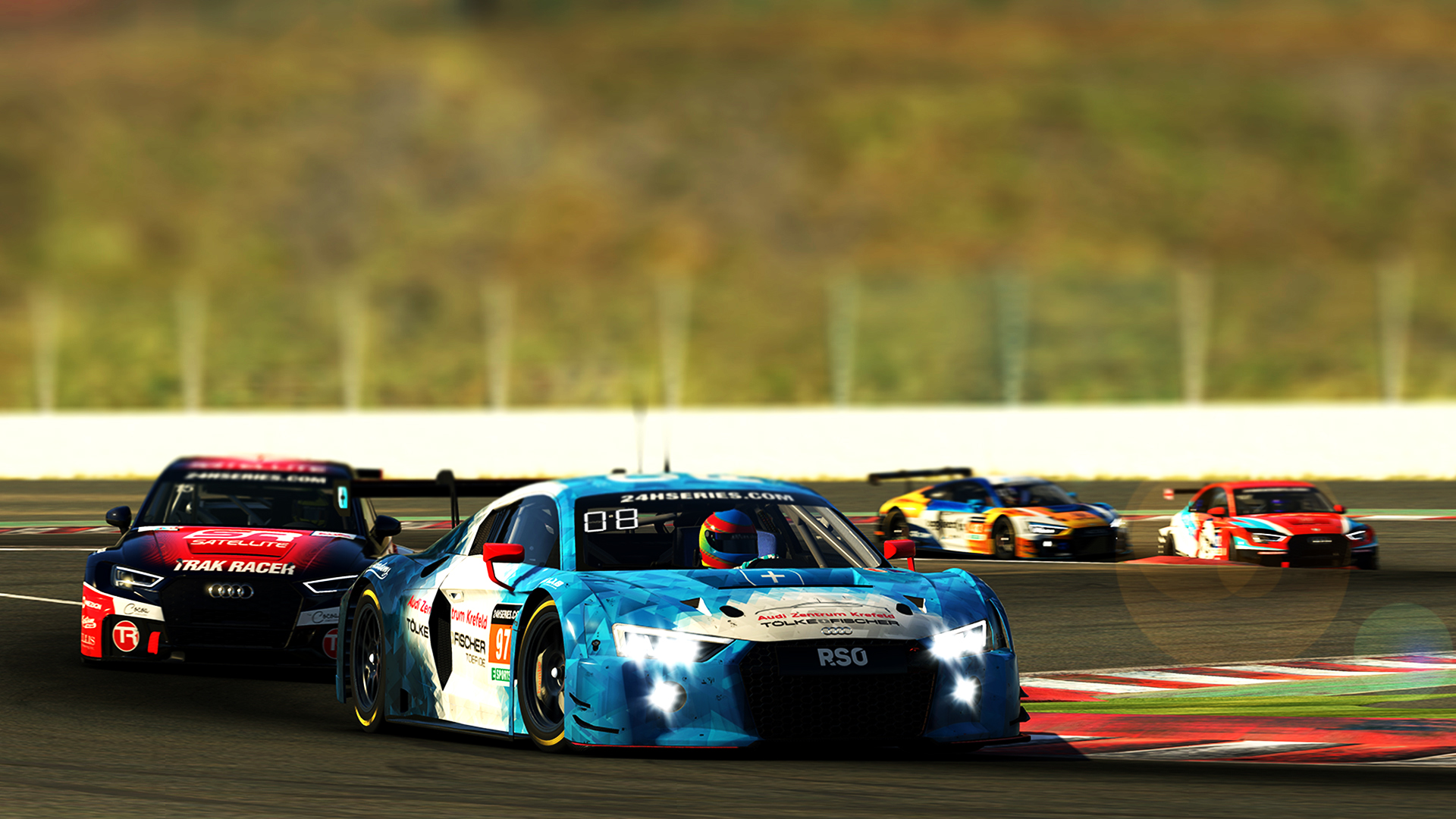 #97 got caught at the start and only finished 12th

About the 24H SERIES ESPORTS

NES stands representative for top level racing, it can be expected to be a top class competition. With all their experience from organizing professional SimRacing leagues, NEO will now host the first ever 24H SERIES ESPORTS. Three classes will contribute to some exciting races. The slowest class offers the new Audi RS3 LMS TCR. I front wheel drive built on TCR regulations. Porsche’s 911 GT3 Cup car forms the Cup class of the 24H SERIES ESPORTS and in GT3 class Mercedes AMG GT3 and Audi R8 LMS GT3 will fight for glory. Rennsport Online will compete in the Audi RSO8 LMS GT3 in the fastest of the three classes. For more information, visit the official homepage of the NEO Endurance Series: www.neo-endurance.com 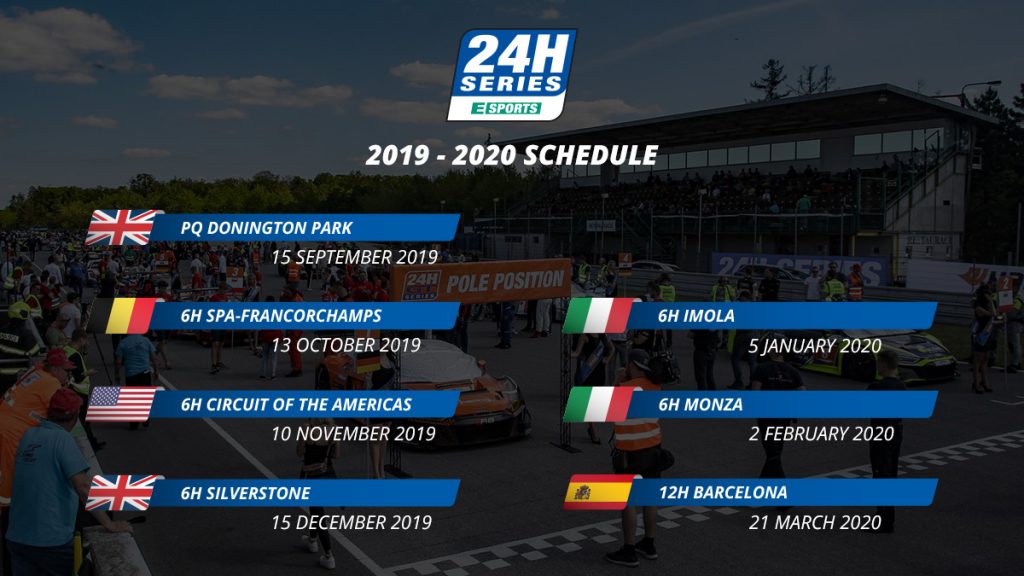